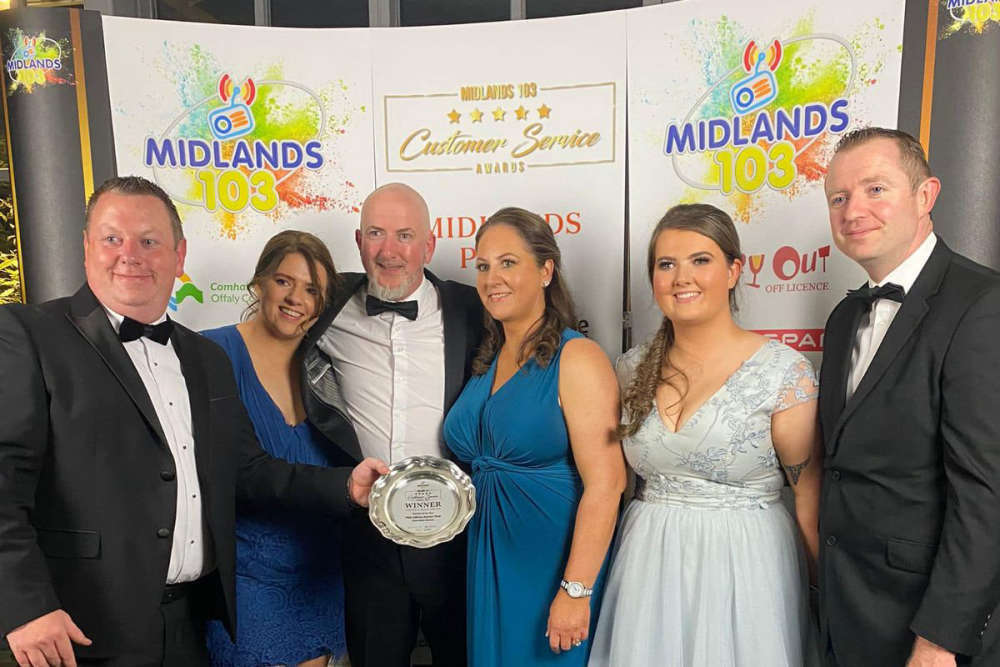 A crowd of 350 people attended an awards evening organised by Tindle radio station Midlands 103 to celebrate the very best of its local business community.

The station, which bills itself as “Feel Good Radio”, staged the 2022 Midlands 103 Customer Service Awards to honour the best companies in the communities it serves across Laois, Offaly and Westmeath in Ireland.

After more than 10,000 nominations were received during the month of May, an all-time record response, Midlands 103 attracted a sell-out crowd of 350 people to a gala ceremony in the Midlands Park Hotel, Portlaoise, on Monday July 4th.

The winners ranged from car dealership of the year, won by O Brien’s Renault, Mullingar, to wedding dress store of the year, collected by Smart Brides, Portlaoise, and tradesperson of the year, which went to James O Connor of Fititout.

Other winners from the full range of the business community, covering large and small enterprises, included barber of the year Boston Barber, from Tullamore, travel agent of the year Cloud 9 Travel / JK Travel, also in Tullamore, and social media presence of the year, awarded to Dead Centre Brewing, of Athlone.

Following a two year Covid-enforced hiatus, nominations from the public were taken in more than 65 categories, and the judges made their selections following intensive evaluations.

The winners were selected by an independent judging panel including the CEO of slimming group leader Unislim, the Director of Retail Excellence Ireland and celebrity solicitor Dr Gerald Kean.

The team at Midlands 103 were so pleased with the black tie awards evening that it could become a two-night event next year.

Will Faulkner, Managing Director at Midlands 103, said: “It was fantastic to welcome such a large crowd back to our awards for the first time since COVID struck.

“We are delighted to champion great customer service in our communities and the award winners deserve to celebrate their successes proudly. Our next major event will be the Midlands 103 Hospitality Awards in November.”

Click here to watch video from the glittering awards evening. For the full list of winners, go to: https://www.midlands103.com/news/midlands-news/the-midlands-103-customer-service-awards-winners-announced/