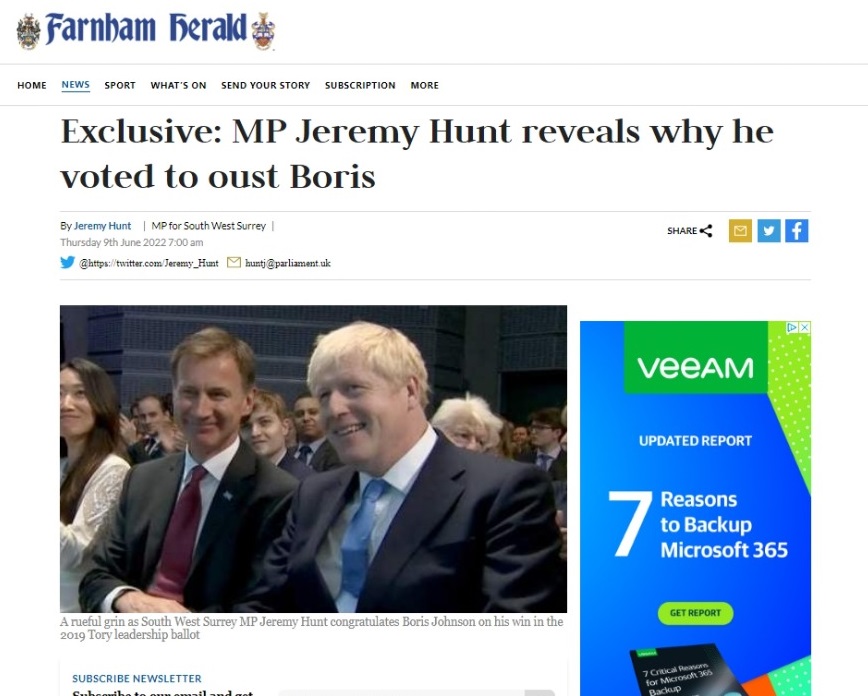 After a dramatic week in politics which saw Boris Johnson survive a vote of no confidence among his own MPs, prominent opponent Jeremy Hunt gave Tindle title the Farnham Herald an exclusive on his call for the PM to be removed.

The MP for South West Surrey turned to his local news brand to explain to constituents his reasons for going public on his opposition to the PM remaining in office, three years after Mr Johnson led the party to General Election victory.

Following public hostility to Mr Johnson’s role in the Partygate scandal over Number 10 parties during the Covid-19 pandemic lockdowns, former Health Secretary outlined his reasons for calling for change in a first-person column for the Herald.

Writing in the Herald, Mr Hunt said: “Many of you have written to me greatly angered and upset about some of the things that have happened.

“I felt Monday was a moment when I needed to let everyone know where I stood – even though I knew some would disagree strongly with what I said.

“So with a heavy heart I said I did not believe the Conservatives were giving the country the leadership it deserved and that we were set to lose the next election if we did not change our leader.”

In the secret ballot on Monday, 148 Conservative MPs voted to oust the PM from Downing Street. Mr Johnson won the support of 211 MPs, with the majority backing allowing him to continue leading the country despite 41% of his party voting against him.

Mr Hunt added: “I may be right or I may be proved spectacularly wrong – but I hope I have done my duty to the people of South West Surrey by speaking honestly.”

To read the full column, go to: https://www.farnhamherald.com/news/politics/exclusive-mp-jeremy-hunt-reveals-why-he-voted-to-oust-boris-550130