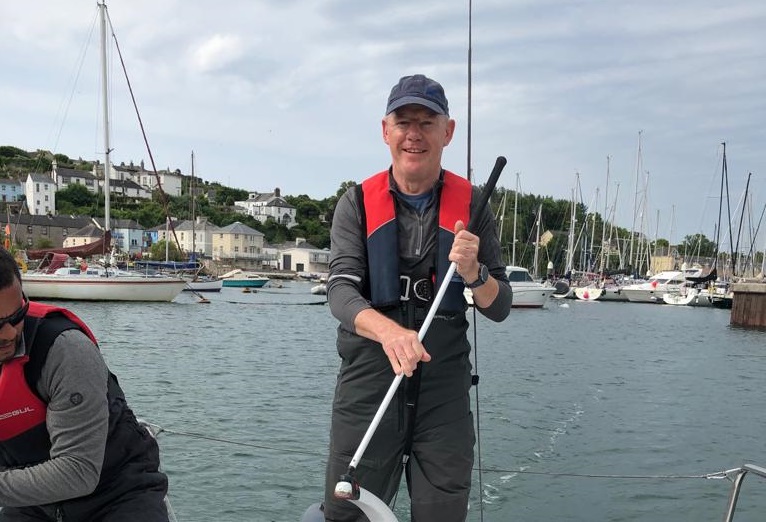 A Tindle digital editor has put aside his phobia of the sea to raise funds for a regional cancer charity by completing a sailing challenge.

Jon Gripton, Tindle’s Deputy Group Digital Editor, conquered his issues with sailing to take part in the Eddystone Pursuit, an annual charity sailing day which sees teams complete a 28-mile route from Plymouth to the Eddystone Lighthouse and back again.

Jon was raising funds for Bowel Cancer West, the charity he runs in the South West, by boarding one of 76 yachts to take part in this year’s event, held on Saturday June 18.

Jon, who sailed on a Melges 24 racing yacht, skippered by Nigel Mashembo, says he is definitely not a sailor. “I get sick on a boating lake pedalo,” he explains.

He also runs Bowel Cancer West, as he is a lifetime sufferer of Crohn’s disease. The charity funds awareness campaigns, training of health professionals and vital research into the causes and cures of the disease.

Jon said the Eddystone Pursuit had been “a great adventure” but a test given his issues with sailing. He said: “The day was not without its challenges, as strong northerly winds powered the yacht out to the Eddystone at 15+ knots.

“Coming back was a different story as the tide turned, the winds increased, and the yacht battled into the stormy conditions.

“I ache in places I didn’t even know I have. At times I was hanging over the side of the yacht to help keep it upright. At others I was floundering on the deck struggling to hold on. It was a great adventure.”

During this year’s Eddystone Pursuit, a yacht lost its mainsail in Plymouth Sound as the winds strengthened and RNLI rescuers were called out to others needing assistance.